The pathology of cancer involves a myriad of dynamically interconnected and interlaced mechanisms; consequently a viable prognosis of anticancer therapeutics rely significantly on the development of moeities that target multiple facets of the disease. In lieu of this, therapeutic regimes targeting cell autophagy is increasingly identified as a viable approach towards enhancing new-age chemotherapeutics, as this process is significantly upregulated in cancers treated with therapeutic drugs. The induction of autophagy has been shown as a prosurvival pathway in cancer cells to increase its survivability against anticancer drugs, subsequently providing ample time for the aberrant cells to develop chemoresistance. Through inhibition of autophagy, this process can be mitigated and subsequently increase the effectiveness of the chemotherapy drugs used. 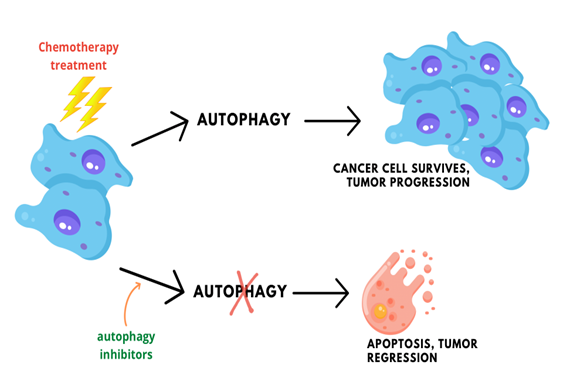 Figure 1: Tumor cells use autophagy as a response towards chemotheraphy drug treatments, promoting cell survival and progression. However, inhibition of autophagy in tumors treated with chemotherapy drugs has been shown to increase the rate of apoptosis and regression of tumor growth.

SAR405 is a PIK3C3/Vps34 inhibitor that systemically prevents the progression of autophagy in tumor cells, but its limited clinical use is marred by premature degradation in the tumor microenvironment. To circumvent this, we developed chitosan nanoparticles that encapsulate and deliver SAR405 effectively into A549 lung cancer cells. Chitosan nanoparticles have been comprehensively studied for anticancer applications as they are generally inert materials biocompatible in both in vitro and in vivo systems. Additionally, the highly reactive nature of amine (-NH2) groups in chitosan enable routes for robust conjugation chemistries that enable specific ground up customisations of the delivery system.

The formation of CNP-SAR405 occured through ionic gelation of the chitosan-SAR405 polymer complex with the anionic tripolyphosphate cross-linker. Particle size analysis showed that accomodation of SAR405 within the core of CNP-SAR405 produced particles 60-80 nm in size, approximately a 70% expansion from empty CNP (~45 nm). Morphological evidence of this phenomena correlated with TEM images recorded, additionally confirming that CNP-SAR405 had also retained its spherical shape consequent from its formation. The encapsulation of SAR405 into CNP-SAR405 was also found to produce a heterogenous sample of varying dispersity, based on the increase in PDI value obtained between the two types of samples. This was expected, as the number of particles present was deemed to be greater than the concentration of compound used. Both particle size and polydispersity of CNP-SAR405 was found to be non-conforming with the concentration of SAR405 used for encapsulation.

Figure 2: (A) Particle size distribution analysis using Dynamic Light Scattering showed that while CNP-SAR405 size was not directly correlated to the concentration of SAR405 used, but influenced the PDI value obtained. Both (B) CNP and (C) CNP-SAR405 samples were observed as spherical particles with a smooth surface, with size expansions to accomodate SAR405 evident in the latter.

As the effectiveness of a delivery vector is contingent on its enhanced entry into cells, the CNP-SAR405 system was correspondingly modified to confer a fluorescent tag and its entry into A549 cells was elucidated via fluorescent imaging. The nanoparticles were able to accumulate into the cancer cells as early as 6 hours post incubation, and uptake sustained throughout a 24-hour window thereafter. When Torin-2 was used to induce autophagy in the cancer cells, those treated with CNP-SAR405 showed a significant degree of inhibition. Flow cytometry data showed that only cells treated with CNP-SAR405 exhibited a retained autophagy profile, compared to untreated and SAR405-treated cells. This not only showed that the CNP-SAR405 system was able to enhanced the mechanistic actions of SAR405, but that its intracellular uptake only occurs by facilitation using the nanoparticle delivery system.

Figure 3: Cellular uptake of fluorescently-labeled CNP-SAR405 in (A) A549 lung cancer cells. The intracellular uptake of nanoparticles (green) occured as early as (B) 6 hour post incubation, and continued to enter cells within a (C) 24-hour timepoint. 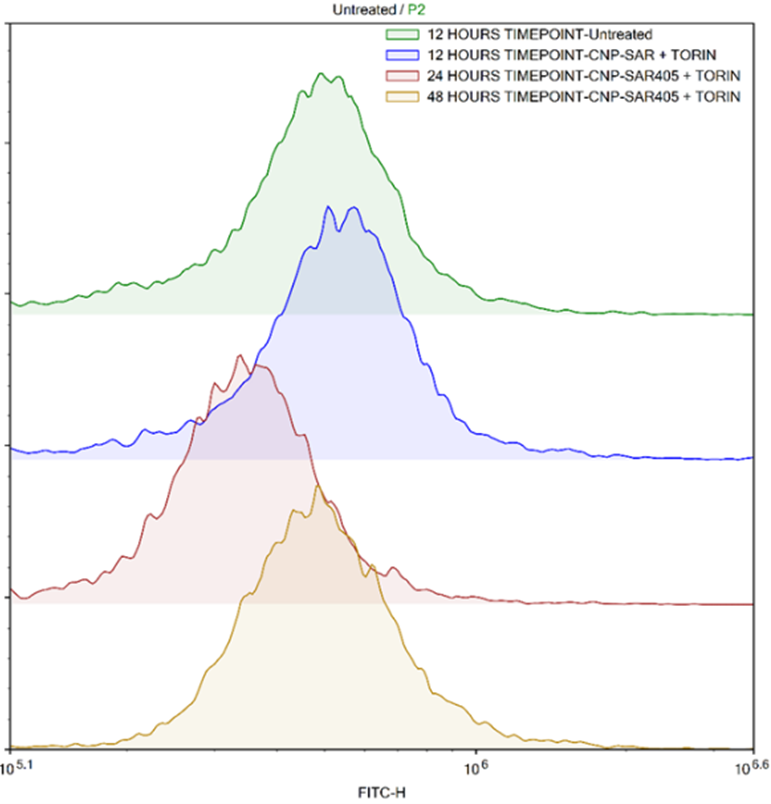 The ability of the CNP-SAR405 system to inhibit autophagy in cancer cells provides an impetus for a multi-pronged approach towards development of cancer therapy. By targeting more than one pathway of a tumor (apoptosis and autophagy), the success rate of current anticancer modalities can be increased whilst reducing the dose of chemotherapy drugs used. This effort in itself will be beneficial for the patient, as this scales down both the drugs’ side-effects and the overall cost of treatment involved. More importantly, the reliance on chemotherapy as the sole treatment option can also be reduced and emergence of mutidrug resistance in cancers would be prevented in patients. At present, the augmentation of doxocurubicin efficacy supplemented with the CNP-SAR405 system is actively pursued as an alternative modality against cancer.

Applications of nanomaterials and nanotechnology