People all around the world were forced to live in lockdown or stay at home when the World Health Organization declared COVID -19 a pandemic in March 2020. During this difficult time, many people suffer difficulty. Working individuals must be able to work from home, and school or college students must be able to learn from home. During heat waves, the situation becomes even worse if there are too many family members in the house and the households do not have access to air conditioning. Heatwaves and the COVID-19 virus provide a larger health risk to the poor and elderly. Furthermore, as a result of catastrophic climate change, which has resulted in warmer and drier circumstances, more homes are becoming prone to fire. As a result, with all of the factors that may affect the health of people staying at home during heat waves and the COVID-19 pandemic, developing a solution to reduce the thermal load of building materials as well as fire risk, particularly in social housing or in hot or tropical regions, is necessary to overcome or mitigate the problem.

Geopolymers are innovative binders with ceramic-like inorganic polymer behaviour. It has been widely employed in a variety of applications that require fireproof and thermal insulation properties, including aviation and vehicle interiors, building construction, composite panels, and more. It is an environmentally friendly material derived from an alkaline solution reaction between aluminosilicates and polysilicates. The aluminosilicate source can be obtained from industrial sludge, agriculture waste ashes and natural pozzolans. Rice husk ash is an example of agricultural waste ashes containing more than 80% silica. It can be used as a source of aluminosilicate in the geopolymer binder. Production of rice husk in Malaysia increases every year, and utilization of rice husk residue for a better application will help in reducing the disposal problem.

The structure of geopolymer was formed by accumulating nanoparticles to form a geopolymer binder, also known as matrix. Many matrix systems, including polymer, ceramic, and geopolymer, have improved mechanical properties by including nanofillers as reinforcement. Nanoclay is a type of nanofiller that is commonly employed as a reinforcement material by researchers. Nanoclay comes in a variety of chemical compositions and morphologies, including bentonite, montmorillonite, halloysite, hectorite, kaolinite, and others. Nanoclay has a typical structure of silicate layers that stack together with an average thickness of 0.7 to 1.0nm. The interlayer surface properties are determined by the surface layer charge, the type of the surface atoms, and the interlayer exchangeable cation. The dispersibility and adherence of nanoclay in the geopolymer matrix are critical for increasing and modifying the geopolymer's thermal characteristics.

The processing parameter is critical for ensuring that the nanoclay is evenly distributed throughout the geopolymer matrix. To make the geopolymer-based rice husk ash, the rice husk was ground into a fine powder to make it easier to dissolve in the mixture of alkaline solution and mix well with nanoclay. After that, the hardened and cured geopolymer was evaluated for fire retardant properties. 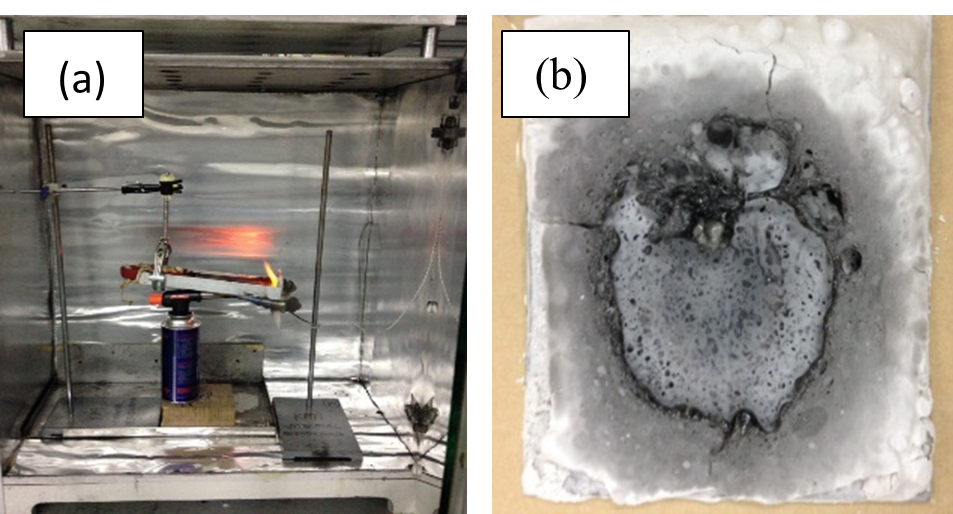 Fig. 1 a) Setup for fire test, and b) exposed fire surface

The setup for the fire test on the geopolymer/nanoclay sample is shown in Fig. 1a. Initially, the mild steel plate was covered with geopolymer/nanoclay on one side. After that, a burner was put roughly 7cm in a distance from the sample. The burner's temperature was approximately around 1000⁰C. The burner was then applied directly to the geopolymer nanocomposite coating sample for about 40 minutes. Simultaneously, a temperature reading was taken on the coated metal's opposite side, which is measured directly on the mild steel surface. Figure 1b depicts the geopolymer/charred nanoclay's surface. As shown in Fig. 2, geopolymer nanocomposite performs better in terms of fire retardant performance than unfilled geopolymer. The geopolymer's intumescent coating properties make the materials resistant to high temperatures and reduce heat transmission to the substrate. Slow gas diffusion in the geopolymer structure induced pressure, which caused the intumescent coating. The fire retardant performance was improved by roughly 52 % with the addition of nanoclay. This occurred as a result of nanoclay's reinforcing capacity, which prevents degradation by producing a protective layer in the geopolymer matrix. Furthermore, a high degree of nanoclay exfoliation may aid in the enhancement of fire-retardant properties. 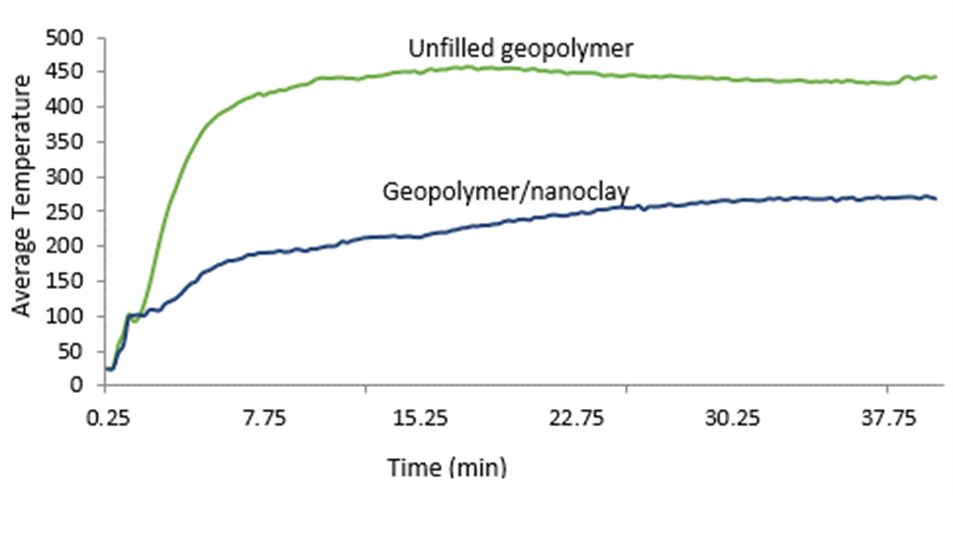 According to the results of the experiments, nanoclay improves the geopolymer's fire retardant properties. As a result, the knowledge gained from this study can be used to maximise the potential of a flame-retardant geopolymer nanocomposite made from rice husk ash. Furthermore, the created geopolymer nanocomposite materials are environmentally friendly and fire resistant, and could be employed as an inexpensive binder in future housing solutions.