Cooking palm oil is widely used in consumer food chain all around the world. Nowadays the demand has tremendously escalated due to the influx of small and medium enterprises (SMEs) into the food and beverages manufacturing industry. Due to that, the amount of waste cooking oil has increased simultaneously which leads to uncontrolled dumping and discharging into the environment. This issue has become our major concerns over its effects towards the environmental ecosystem and biodiversity. This project is looking into how the waste cooking palm oil (WCPO) could be recycled and turned into economic potentials as an alternative to solve this problem. This is in line with Malaysia’s Economic Transformation Program Area (NKEA) that among others is focusing to develop an efficient solid waste management system to indirectly contributes for higher Gross National Income (GNI) for the country.

From previous studies, carbon nanotube cotton (CNTC) is a special type of carbon nanotube (CNT) which exhibit good electrical conductivity thus making it a promising substrate to improve the performance of piezoelectric nanogenerator. The CNTC plays a major role in enhancing the efficiency of the nanogenerator in nanoscale devices by its outstanding charge carrier mobility as compared to other common substrates such as silicon and metal. The advantages of using WCPO as the carbon feedstock in the synthesis of CNTC are because it is inexpensive and has no issue on shortage of supply.  Furthermore, CNTC is a very flexible material and is comparable to commercial flexible substrates that are commonly used in mobile electronic devices such as Polyethylene Terephthalate (PET), Polyethersulfone (PES) and Polyethylene Naphthalate (PEN).

In this study, zinc oxide (ZnO) is identified to be a suitable material to be hybridized with CNTC as piezoelectric nanogenerator due to its semiconductor and piezoelectric properties that are relatively biosafe and biocompatible. If proper synthesis parameters are applied, a desired growth of ZnO nanostructures on CNTC can be achieved. This research is looking into the potential of CNTC as a substrate with high carrier mobility and flexibility for improved piezoelectric nanogenerator, which to our knowledge has not been investigated before. It is expected that the combination of CNTC from WCPO and ZnO will result in an efficient piezoelectric nanogenerator with significant electrical properties for various applications in nanoscale electronic devices.

CNTC from WCPO was synthesized using floating catalyst chemical vapor deposition (FCCVD) reactor with certain fixed parameters that enable the formation of CNTC in the tube furnace. WCPO, iron catalyst and thiophene as growth enhancer were homogeneously mixed and injected into the quartz tube for 20 minutes. The hybridization of zinc oxide and CNTC was carried out using electrochemical deposition (ED) process. There are three working electrode were used which were CNTC, platinum as the anode and saturated calomel as the reference electrode.

The physical appearance of CNTC image which resembles cotton sponge or cotton candy that is soft, fluffy and lightweight can be seen in Figure 1(a).  Meanwhile, Figure 1(b) shows the CNTC image obtained by using High Resolution Scanning Electron Microscope (FESEM) is consisted of long and short truncated nanotubes crossing each other forming a network of CNT threads.

Figure 1(c) shows the image of CNTC after being hybridized with ZnO using electrochemical deposition (ED) method. It can be observed that the diameter was getting bigger due to the coatings of ZnO along its tubular shape. Figure 1(d) shows the quantitative element analysis (EDX) of the sample compositions coated with gold, yielded C 50.51%, O 8.27% and Zn 22.59% which confirms the presence of ZnO on the CNTC 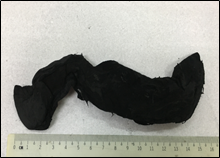 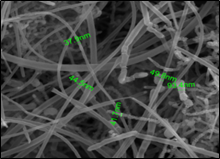 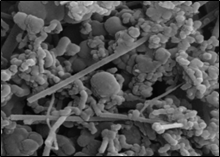 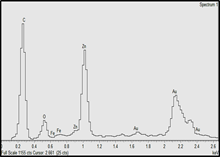 CNT cotton has successfully synthesized from chemical vapor deposition process using waste cooking palm oil as the carbon source. Zinc oxide has successfully deposited on the CNT cotton (CNTC) using electrochemical deposition (ED) and chemical bath deposition method. The diameter of CNTC which consisted of SWCNT and MWCNT increased after the coating of ZnO layer along its tubular shape. The hybridization of CNT cotton which is mechanically strong, light weight, excellent conductors of heat, and transport electrons with zinc oxide is promising to be applied as flexible piezoelectric nanogenerator in nano scale devices.