Palm oil production is an important source for the country's economy and Malaysia is the second largest producer of palm oil commodities in the world. Oil palm trees are planted over 5.5 million hectares, over 60 percent of the total agricultural land in Malaysia. However, this tree is threatened with the most critical disease, namely ganoderma. This threat can result in a loss of about RM1.5 billion to the country.

Chemical treatment of fungicides and fumigation could be considered as an immediate measure for the short-term control of the disease. He said the use of systemic fungicides and soil fumigant along with proper delivery techniques could help suppress and control the ganoderma disease in oil palm. Until today no single control has been reported to be effectively control the disease in the field.

This research was conducted to produce anti-fungal nano-delivery system for the treatment of ganoderma disease known as nanoderma. This innovation uses fungicidal and fumigation treatments along with a nano-carrier system that improves the delivery of the active ingredient agents to prevent and control ganoderma disease. 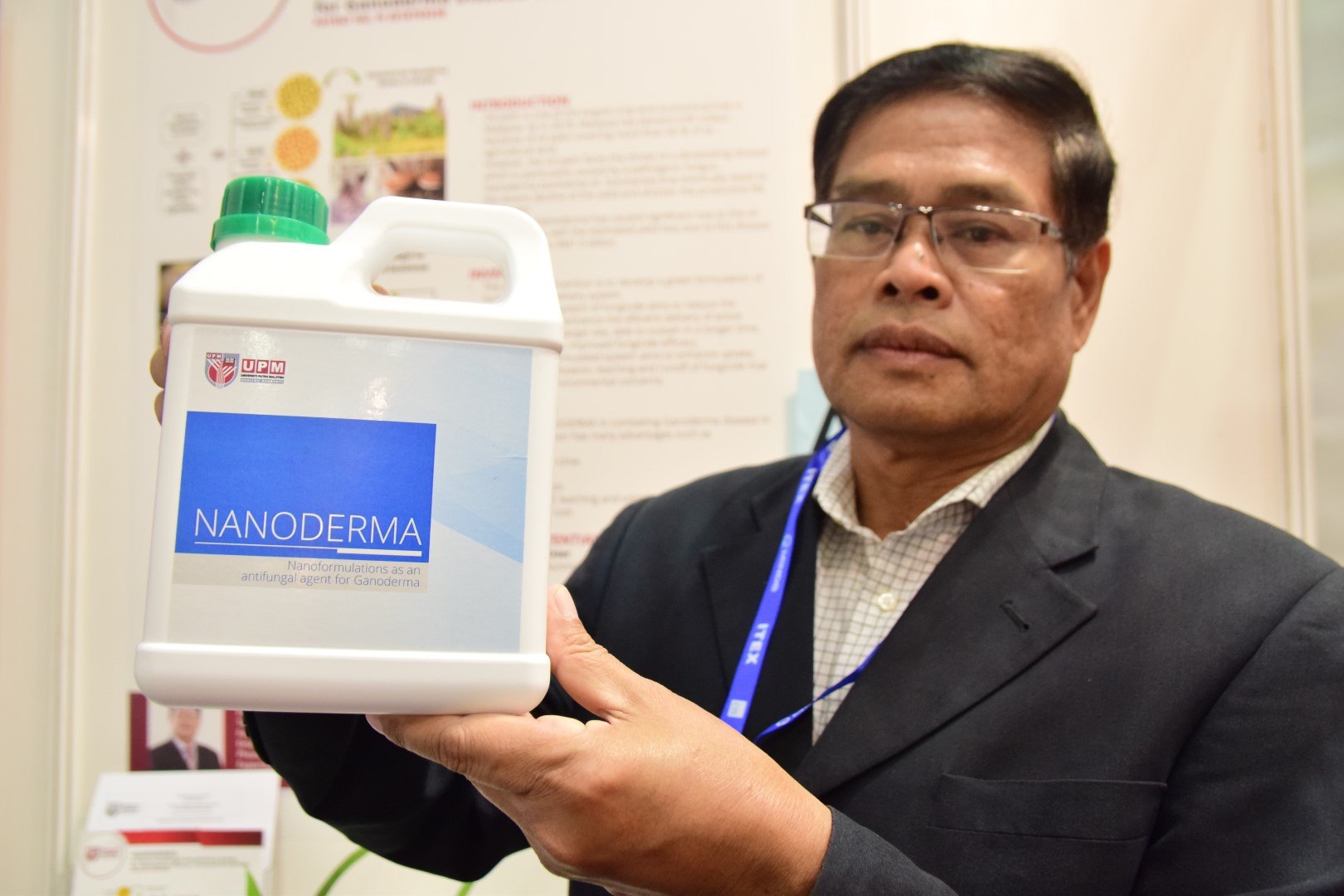 Fungicides and fumigation treatments have proven to prevent the growth of ganoderma boninense, while nanotechnology has proven to assist in promoting growth in the agricultural sector. Nanochemicals in agriculture were aimed at reducing the dose of active ingredients in the use of chemical products, increasing yields and minimizing nutrient loss during fertilization. Using the nanotechnology platform, fungicides and/or fumigation active agents can be incorporated into a matrix biopolymer, for the formation of nanofungicidal and/or nanofumigation delivery systems and transport them to desired targets more effectively.

Nanoderma in solution form can be used as a preventive and curative treatment in combating ganoderma disease. As a precautionary measure, the nanoderma acts to kill the ganoderma fungus when the ganoderma spore sprouts before mycelia can grow and develop in the plant tissues. While for curative treatment, nanoderma eradicates and kills ganoderma fungi when mycelia penetrates the parenchyma and stops the spread of ganoderma infections in the plant. Fungicides and fumigation are used as an active ingredient, while biopolymer is used as a carrier in the formation of nanofungicide and/or nanofumigation delivery systems.

The use of nanoderma in combating ganoderma disease has many advantages. Among them are, the regulated release feature will reduce the wastage of fungicides and increase the effectiveness of the fungicides. Other advantages are the reduction in leaching and volatilization, low toxicity and green innovation, as well as the long-circulating times which help to reduce labor costs. Research on Nanoderma technology began since February 2015 is now ready to be commercialized. The findings from the studies helped to maintain the economic benefits of the palm oil industry by controlling the fungicides caused by ganoderma through the delivery of nanofungicide.

Regulated/controlled release features will reduce fungicide wastage and improve fungicide effectiveness, so environmental issues such as excess and accumulation of fungicides can be minimized. In addition, a long circulation time will overcome the shortage of workers in the palm oil industry by reducing the frequency of application of infected palm trees, he said. He added that the fungicide control system has low toxicity and makes it harmless to those who use it. In addition to the industrial use and oil palm plantations and smallholders, this innovation can also be used in plantations and small scale.

This article was reported in Sinar Harian daily on May 6, 2019.

The project was supported by the Nanomite grant with the collaboration of MPOB.